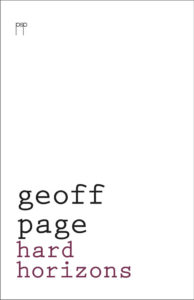 Hard Horizons is a surprising title from a poet as genial, balanced and humanly moderate as Geoff Page . . . His irony wry humour, and emotional understatement mark an aesthetic of ‘Art is that which hides art’ – in my view, the most valuable aesthetic of all.
Denis Haskell, Australian Book Review June-July 2018

Page seems to genuinely like people, with all their foibles; who else would write of ‘the anonymity of cities / where all the streets are rich with strangers’? Above all, Gods and Uncles is a testament against dogmatism and moral censoriousness, whether it comes from gods, uncles, preachers, or paranoids – all those ‘joyously enriching death’ by arguing that ‘Annihilation’s not good enough’ for people who disagree with them.

Page sets against this moral certitude a liberal humanism and a sense of fun. He is surely our best contemporary public poet; his poems work because of his humanity, his authorial poise, and the wit and intelligence that lie just beneath his light touch. Page’s humour is serious and thoughtful, as poems such as ‘Times We Didn’t Know Were Final’ and ‘Call yourself a socialist?’ make clear. His poetry is skilful and respectful of an audience, his voice reassuring even when treating tough themes. Like his ‘drip-dry’ shirt ‘bought in ’63’, Page’s book is ‘a triumph over entropy’.
Dennis Haskell, Australian Book Review Sept 2016

Geoff Page grew up on a cattle station on the Clarence River in northern NSW. In addition to twenty-four collections of poetry, Geoff has published two novels, five verse novels, several anthologies, two books of translation and a biography of the jazz musician, Bernie McGann. He moved to Canberra at the beginning of 1964 and retired at the end of 2001 from being head of the English Department at Narrabundah College, a position he had held since 1974. He has reviewed Australian poetry widely since 1967 and has run monthly poetry readings in Canberra continuously since 1994. His awards include the Grace Leven Prize, the Christopher Brennan Award, the Queensland Premier’s Prize for Poetry, the 2001 Patrick White Literary Award and as well as the 2017 and 2020 ACU Poetry Prize. Selections from his work have been translated into seven languages. He has read his work and spoken on Australian poetry throughout Europe and in India, Singapore, China, Korea, the United States and New Zealand.