The parable of the Petrovs

On a typical autumn morning in April 1954, newsagents across suburban Australia drove past countless thousands of texture brick and tile homes, tossing tightly rolled copies of the morning newspaper into a never-ending sea of neatly mown front yards.

Yawning in their dressing gowns, innumerable card-carrying members of the Australian petit-bourgeoisie retrieved their Heralds, their Ages and their Advertisers and unrolled them to encounter headlines more usual in Berlin or Kiev.

All of a sudden, the seediest scenarios – secret agents and double agents, betrayal and despair, liquor, women, intrigue, ASIO, the KGB – were all on offer, to be ingested with the cornflakes, but right here and now, not far away and over there.

Trove, the invaluable digital newspaper archive at the National Library of Australia, lists many thousands of breathless, hyperbolic newspaper articles about the defection of the Petrovs.  This one gives the flavour: 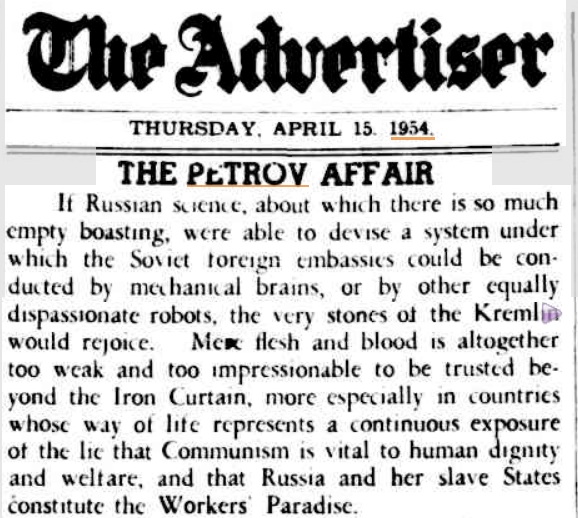 That particular atmosphere, that gripping implausible moment in time and place, is captured and explored in caressing, intricate detail by our latest Pitt Street Poetry offering – The Petrov Poems – a verse novel by Canberra poet Lesley Lebkowicz.

The paper’s a shield behind which he thinks
about Dusya.  Leave her alone, colleagues had advised
when he met her.  The arrest of Krivosh makes her a risk.
But an invisible cord wound him into her world.
Now she comes in from the kitchen
patting her hands with a tea towel.  What are you doing?
In answer he holds out the paper.  Anything we should know?
He shakes his head.  She is strong,

she will survive without him.  She studies him
until she sighs, I’m going to bed.
He won’t mention defection again.
He’ll go without telling her.
He’ll take nothing that could implicate her.
That should keep her safe –

The Petrov Poems offers something entirely different from the average run of local Oz poetry collections.  It combines the tension and narrative drive of an early John le Carré novel with the human insights of a Rosemary Dobson and the nuanced political complexity of a late David Marr monograph.  Its layers of meaning repay reading and re-reading.

These days the newsagent’s morning pilgrimage is usurped as a source of headlines by a dawn chorus of solipsistic bloggers, twitterers and soi-disant Canberra insiders.   Yet the great dramatic political set-pieces remain few and far between.

The Petrov Affair is one such, and amply deserves its celebration and deconstruction in this unforgettable new verse novel.